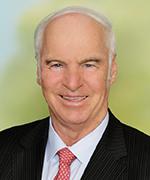 Join Michael Knox, Chief Economist & Director of Strategy at Morgans Financial Limited, at a Post-Budget lunch to hear his thoughts on the Budget and the economic outlook.

The event date has changed to 4 May 2016 due to recent changes to Federal Parliament sitting weeks. The Budget will be presented to Parliament by the Federal Treasurer, Hon. Scott Morrison, on 3 May 2016

Michael was an Australian Trade Commissioner serving in Saudi Arabia and Indonesia. He joined Morgans in Sydney in 1988.

He was Chief Institutional Options Dealer until moving to Brisbane in 1990 as Economist and Strategist. Michael joined the Board of Morgan Stockbroking in 1996. He became Director of Strategy and Chief Economist in 1998.

From 2003 to 2012, he was Chairman of the Advisory Committee of School of Economics and Finance at the Queensland University of Technology. He has been a Governor of the American Chamber of Commerce from 1997 to 2007.

In 2008, Michael joined the Board of The City of Brisbane Investment Corporation Pty Ltd. Michael was the President of the Economic Society of Australia (Qld) Inc from 2009 to 2013.

Expect: A delicious two-course meal with complimentary beverages (up to the limit of our set bar tab).

Booking: Please use online booking facility to pay via PayPal or Credit Card. There is a facility to pay offline by rendering an invoice, if you need to access this, please make arrangements with the Secretariat before Friday 29 April 2016