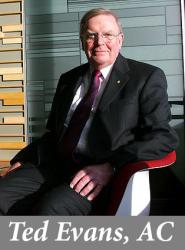 The Economic Society of Australia (Qld) in conjunction with the University of Queensland, Queensland University of Technology and Griffith University has established an annual Ted Evans Public Policy lecture, with the inaugural lecture delivered by Ted Evans, AC, former Secretary to the Treasury and Chair of Westpac from 2007 to 2011.

Ted is one of Australia’s greatest public servants, and this named lecture is a recognition of his significant contributions to the development and implementation of effective economic policy, which is the subject of his address.

He will speak on the critical importance of informed public debate to the development and implementation of effective public policy; and of the role of different contributors to that debate. He will also cover the use of tools such as the theory of the second best, and the place for 'one size fits all' policy.

There is no charge for the event.  Light refreshments will be served after the address and prior bookings are essential.

Ted Evans during his time in the Australian Treasury played a key role in all the major policy reforms of both Labor and Coalition Governments from the 1980s through to 2001 from floating of the Australian dollar, tax reform and broader micro-economic reform including reform of industry policy and later industrial relations reform.  He was appointed Secretary to the Treasury in 1993 and served in that capacity until his retirement from the public service in 2001, during which time he served both Treasurer Keating and Costello with distinction.  Following his retirement from the Treasury, Ted joined the board of Westpac and was its Chair from 2007 to 2011.

If the event shows as fully booked, please email admin@esaqld.org.au to be put on a wait list if places become available.