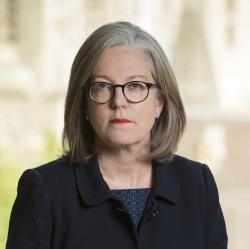 Drawing on her extensive experience during a distinguished career in both the public and private sectors, Karen Chester will discuss the key role that public policy should play as the first line of defence for establishing competitive and fair markets. The subsequent lines of defence being consumers, the conduct of firms and finally the regulator. Karen will also explore why a few critical markets today (including the financial system) are falling short in delivering competitive and fair outcomes and how these failings might be addressed.

Karen Chester has had a distinguished career as an economist in both the public sector and private sector. She is currently Deputy Chair at ASIC and previously a Commissioner at the Productivity Commission from 2013 and Deputy Chair from May 2016.

During her time at the Productivity Commission she led the Commission's high-profile inquiry into the efficiency and competitiveness of the superannuation industry released in January 2019, and was involved in many other reports including on intellectual property arrangements. In 2015 she chaired the Capability Review of ASIC, which recommended reforms to assist ASIC become more confident and externally focused in its approach.

Before joining the Productivity Commission, Karen was a Partner at Mercer and Global Head of Infrastructure, a Partner at Access Capital Advisers and the CEO of Access Economics, as well as a director on several Australian infrastructure company boards.

There is no charge for this event but bookings are essential.

The Economic Society of Australia (Qld) in conjunction with the University of Queensland, Queensland University of Technology and Griffith University has established an annual Ted Evans Public Policy lecture, with the inaugural lecture delivered by Ted Evans, AC, former Secretary to the Treasury from 1993 to 2001 and Chair of Westpac from 2007 to 2011.

Ted is one of Australia’s greatest public servants, and this named lecture is a recognition of his significant contributions to the development and implementation of effective economic policy.