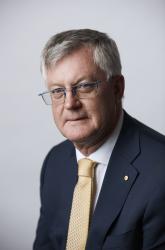 IMPORTANT NOTE: The 2021 Ted Evans Public Policy Lecture was to be held face to face in Brisbane but due to travel restrictions has been moved online (national ESA webinar). All previous registrations have been captured and re-registered to attend the Central Council online event.

2021 Ted Evans Public Policy Lecture, by Dr Martin Parkinson AC PSM - Navigating an Uncertain Future: Is Australia up to meeting the challenges and grasping the opportunities that await?

As Australia looks to rebuild after the health and economic devastation associated with the COVID pandemic, Martin Parkinson will explore some of the challenges and opportunities the nation will need to navigate. Join the latest instalment in the Ted Evans Public Lecture Series as Martin Parkinson discusses:

As the Secretary of the Department of the Prime Minister and Cabinet and The Treasury, Martin was Australia’s most senior public servant. During his tenure at PM&C and as Secretary to the Treasury between 2011 and 2019, Martin led our key public sector organisations during a period of considerable political uncertainty, serving under five prime ministers during this time.

The Economic Society of Australia (Qld) in conjunction with the University of Queensland, Queensland University of Technology and Griffith University has established an annual Ted Evans Public Policy lecture, with the inaugural lecture in 2017 delivered by Ted Evans, AC, former Secretary to the Treasury from 1993 to 2001 and Chair of Westpac from 2007 to 2011.

Ted Evans was one of Australia’s greatest public servants, and this named lecture is a recognition of his significant contributions to the development and implementation of effective economic policy.